Skip to content
Keeping everything up to date. As new information as surfaced, previous posts are added to or corrected.

Time for a little housekeeping. I have added or corrected information about several previous posts as new information has come to light.

The Re-Entry dragster post is one of the most popular items on Vintage-Nitro. I have learned that the owner was Robert Lindwall of Illinois and the car was destroyed at Indy. It is nice to have a owner/driver name to put with the car, but I wish I knew what year the car was wrecked and what happened to Lindwall.

I made a huge error when I identified the 427 Dynamite Chevelle as a funny car running under the Dynamic Speed Center banner. The Michigan car was actually campaigned by Billy Harris and apparently ran nitro at some point.

Finally, it has proven difficult to determine just what engine powered the Quick-Draw A/Altered. I thought it was a Buick V-6, reader Scott Trainor claimed it was an Olds V8, then I discovered a Car Craft photo that stated it was a Cadillac V8.

I’m trying to keep everything as accurate as I can, so if you notice something that isn’t right, shoot me an email so I can correct it.

1 thought on “Updates to previous posts” 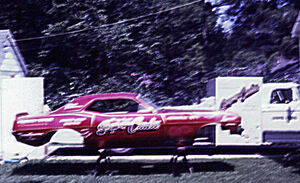 The Transformation of the Super Cuda: Success, Evolution and Tragedy