Skip to content
Even back in 1965, I realized that Tom's Nasty Torker (TNT, get it?) was a pretty radical race car. Not a funny car or anything like that, but definitely a little extreme.
Another photo from the forgotten car show from 1965, which I mentioned in the earlier Maximum Performance Chevrolet post.

Even back in 1965, I realized that Tom’s Nasty Torker (TNT, get it?) was a pretty radical race car. Not a funny car or anything like that, but definitely a little extreme.

The driver’s name lettered on the door is Tom Sidener. Because of the car’s name, I assume Tom was the owner as well. Anyone have any info on Sidener?

I don’t think I ever saw another induction system quite like this. The inner headlights have been replaced with aluminum funnels, which lead to a flexible tubing system inside the engine compartment. The left tube feeds the forward carburetor, while the right transfers air to the rear carb. The moon tank located between the funnels is a nice touch. The car still has a front licence plate, but I would say this would be a little too wild for the street.


According to the lettering on the front fender, the Torker ran a 427 Hiriser Ford powerplant. That was a pretty staunch engine back in 1965.

I think I may have seen this car run on one of my early visits to Detroit Dragway, but I can’t remember for sure.

Somebody must remember this car. Anyone? 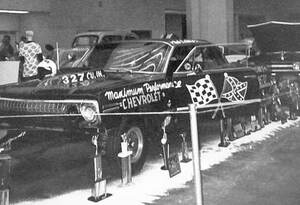