Skip to content
The 'Goose was no stranger to grease under his fingernails. He knew a thing or two about building and maintaining race cars, and before he became a professional driver, he made a living as a welder.

Of the thousands of photos I shot at Detroit Dragway, this is one of my favorites. It captures Tom The Mongoose McEwen’s crew thrashing on his funny car under the watchful gaze of the ‘Goose himself.

Like the Motorcity Dragway photo I posted recently, this is another instance where the longer you look, the more interesting things you see.

McEwen and crew are on a mission

Notice the team has torn the engine down to the studs. Taken just before the semi-final round, it is clear that the ‘Goose wasn’t laying back. This was an all-out push to gain the final.

Looking near the front wheels, you can a pair of inverted Hemi valve covers, each with rocker arm shafts laying inside. The cylinder heads aren’t visible in the photo. I assume they are in McEwen’s Chaparral trailer, where other crew members are busy massaging the valves.

Speaking of the crew, notice that they are wearing colorful uniforms. No raggedy tee-shirts for this team. Everyone is professionally attired, even though they are shoulder-deep in race car parts.

This is the scene in McEwen’s pit at the semi final of a national event. No awning, no crowd barriers, nothing to keep interested fans away. Yet, there is only a handful of fans watching.

If you look on the right of the picture, behind McEwen, you can make out the grille of McEwen’s Navy-backed Plymouth Duster body shell. It is laying on the ground, with a couple of body supports arranged in front.

From McEwen’s ‘Fro, it is obvious this photo was taken in the 1970s. The ‘Goose probably had to order an extra size helmet to fit over all that hair.

The picture makes it look like McEwen let his crew carry out all the work, while he just stood back and watched. In reality, the ‘Goose was no stranger to grease under his fingernails. He knew a thing or two about building and maintaining race cars, and before he became a professional driver, he made a living as a welder.

To the left of the photo, Bill Schifsky’s Bear Town Shaker funny car can be seen across the pit area. The Mustang II ran off the track the previous night, but driver Rick Johnson and the the car were back for the Sunday eliminations.

Unfortunately, the crew’s determined effort wasn’t enough. McEwen lost in the semis, setting up the Snow versus Hoover final I documented before.

1 thought on “Tom The Mongoose McEwen at Detroit Dragway” 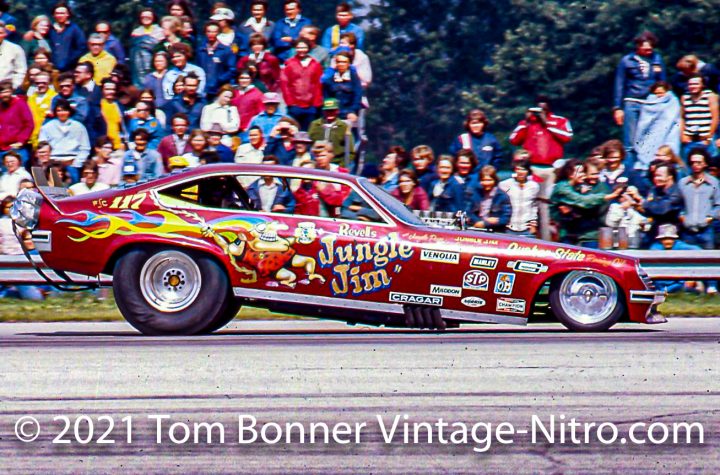