Skip to content
1966 was a pivotal year in funny car development. Mercury unveiled the first flip-top funny cars, selecting Don Nicholoson, Steffey & Schartman, and Kenz & Leslie to campaign flip-top Comets. (Art Chrisman ran a fourth factory Comet, but by this time, his machine was a supercharged roadster) Powered by injected Ford SOHC engines, the new floppers quickly established themselves as the quickest injected cars in the country and had little to fear from any unblown car they faced.

The Ramchargers Dart was an exception to the rule, as the Rams were able to run similar times to the Comets, despite being an intermediate style with a fixed, non-flipup body.

There is no doubt about it, the Ramchargers Dart was the class of the field at the Detroit Dragway show in August 1966. Since none of the factory Comets were on hand, the candy-striped Dart owned the place that August night.

The Ramchargers Dart: as good as the floppers?

While the Dart wasn’t a flopper, it was similar to the future fuel coupes in a number of ways. First, the entire body (excerpt the hood) was fiberglass. Many intermediate funny cars used factory steel body shells, adding fiberglass doors, hoods and trunk lids. The Ramchargers had the Dart body laid up in fiberglass and then draped it over a Woody Gilmore tube chassis. They chose to craft the hood from sheet aluminum, because they were concerned about stress fractures around the opening for the fuel injector tubes. The rest of the car was ‘glass.

As you can see from the photo, the driver (Jim Thorton and Mike Buechel alternated as the pilot) was located in the rear seat area, just like the Comets. While the body wasn’t designed to flip up, in most respects the Dart was similar to the design of the factory Mercurys.

From this side, you’ll notice there are no door lines. The car was built with a single opening door on the right side of the car. This made construction easier and lighter. If you look closely, you will notice the steering column poking up above the window sill. I believe the dark object lying on the aluminum motor box is the steering wheel itself. Apparently, the Dart’s steering setup was set up like a NASCAR stocker, with a quick release, removable steering wheel. The driver did have the luxury of the opening door on the right side, so he didn’t have to climb through the window.

One other interesting thing about the car; the automatic transmission was shifted with a standard Chrysler pushbutton mechanism, mounted on an aluminum pedestal in front of the driver’s seat.

Of course circumstances favored the Ramchargers that night, even though they were a favorite to win in any case. If I remember correctly, Bill Lawton broke in the Tasca Ford Mustang and never made a complete run. It was Lindamood’s first time out with the new Charger, and he was more interested in sorting out the car then making an all-out pass.

Malcolm Durham’s Corvair was similar in weight and power to the Ramchargers, but he was still figuring out the handling on his Strip Blazer Chevy. Durham created one of the first Corvair funny cars, and initially it was built with a nearly stock 108″ Corvair wheelbase. He quickly found the short wheelbase was a liability, so the car went back into the shop to be lengthened. I think the modification was performed just before the Detroit race, as the Corvair showed up with a two foot wide band of primer across the hood and sides, where the body surgery has been performed. Durham’s crew was still dialing in the refurbished car and it couldn’t match the Ramchargers in speed or ET.

That left the two “old school” Chevelles. Sturm’s car was the best looking car on hand, but it was also the oldest and heaviest funny car there. The car just wasn’t competitive against the light-weight Dart.

Seaton’s Chevelle had lots of muscle, but the Dart’s fiberglass body and tube frame gave the Dodge a huge weight advantage.

In the end, the Ramchargers light-weight Dart bested all comers and wound up king of the hill. Too bad none of the factory Comets were there. That might have made it more of a fair fight. 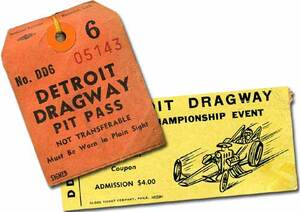