Skip to content
The Buckpasser Willys coupe was campaigned by Tinney and Tignanelli and competed in the B/Gas Coupe and Sedan class
The Buckpasser: B/G Willys Coupe at Cobo Hall.

This trim little Willys coupe was on hand for the 1968 Detroit Autorama. Other than the Buckpasser name and the Shadowoods Auto Center lettering on the hood, this picture doesn’t provide much information on the little coupe.

Fortunately, Google is our friend. Typing “Buckpasser Willys” in the search field in Google resulted in a large page of gasser photos on the site called Gasser Madness.

Raced by Tinney and Tignanelli

There I found a photo of the Willys at National Trail Raceway, along with the information the car ran in the B/Gas category and was campaigned by “Tinney and Tignanelli.”

There is no mention of first name for either member of the team.

A little research revealed that Tom Tignanelli was the driver of the UFO Altered Wheelbase Plymouth Fury in the mid-sixties. I never saw the UFO run, but in the sixties, I did see numerous photos of the A/FXer in various racing magazines. The car was owned by the Tignanelli Brothers and also carried Shadowoods Auto Center sponsorship.

So which of the Tignanelli brothers was partner with “Tinny” on this gasser?

B/Gas indicates the car was normally aspirated. Supercharged gassers were indicated by a double class letter or by a “s” after the eliminator designation. The top gassers competed in A/GS or AA/G, depending on the sanctioning body.

What engine powered the Willys Coupe?

A B/G car would have a less powerful engine with either injectors or carburetors. I can’t say what engine is under the Buckpasser’s hood, but I would guess it is a small block V-8 of some sort. The small block Chevy was extremely popular for this kind of work, but the Tignanelli’s seem to favor Mopar powerplants. I’m only guessing but I think the car probably had some sort of high winding Dodge or Plymouth small block V-8.

I think the three guys setting up the display in the background are interesting. This photo must have been shot on Friday night, right after the three-day show opened to the public. Note the rag protecting the paint where the hood closes has yet to be removed. These guys are thrashing to get the display set up, even as the crowds pour in.

Retrived from the Archives

Shot in 1968, no one in this photo had ever heard of the internet, or the personal computer for that matter. The only computers were in gunnery control centers on battleships and huge mainframes used in a limited number of financial institutions. These men could hardly guess that some teenager would snap a photo of them struggling with the display stands and that more than forty years later their image would be on the world-wide web for all to see.

We live in a magical age, indeed.

Anyone have anything to add about this Willys gasser? 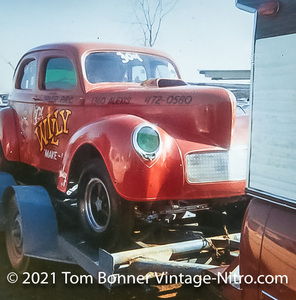 Lil Willy Make It: Well, Will He?