CarTech Books recently sent me a review copy of Don the Snake Prudhomme, My life beyond the 1320. Color me very impressed.

Who is Don Prudhomme?

I have seen Don Prudhomme race countless times. When I covered the sport in the seventies and eighties, I can’t remember a single NHRA major event where he wasn’t in attendance. (And usually kicking butt.) I also saw him at numerous independent events and match races.  Despite this, I never thought I knew the real Don Prudhomme. I got to know many other top fuel and funny car pilots, but the Snake was a cipher. He seemed very remote, always concentrating on the race car and chasing points. I had tremendous respect for the man, but I didn’t know all that much about him other than his win/loss stats.

All that has changed after reading this book. It isn’t the typical racer biography, instead, it feels like someone turned on a tape recorder and asked the Snake to describe everything he can remember of his racing career. The result is an honest exploration of one of drag racing’s biggest stars; and how he evolved. It is all here: the good, the bad, and plenty of things I never knew before.

Prudhomme isn’t hesitant to admit when he made mistakes, whether it involved stealing a transmission out of a junkyard or failing to listen to advice from others.

He is unafraid to talk about friends he made and friends he lost in the course of chasing championship points. There are some times where sincere regret shines through his words. There are many things he would change if he had the opportunity.

Which doesn’t mean that Prudhomme isn’t justifiably proud of what he accomplished in his long career. He takes the reader on a whirlwind journey through the history of drag racing, from his initial runs in a club dragster; to becoming a hired driver; to eventually controlling his own team. We see him embrace funny cars; half-heartedly at first, then going all in to dominate the class. Prudhomme then explains his return to top fuel and his stint as team owner after he retired from the driver’s seat. We witness every step in Prudhomme’s career, examining his motivations and observing what went on in his mind. I found it fascinating to learn how the Snake’s career unfolded. I still can’t claim I know Don Prudhomme personally, but he is no longer a man of mystery. Now I feel that I understand the man behind the legend.

More than a coffee table book

This looks like a coffee table book, but it doesn’t read like one. If you skip around and simply read little excerpts here and there, you will ultimately become frustrated, because the book is designed to be read as a complete story from end to end. If you start in the middle you will find yourself lost as Prudhomme frequently refers back to points covered earlier in the book. Save yourself some grief and just read the book from the beginning. You can thank me later.

Don’t expect a number of lavish full-page photos, because you won’t find many here. There are plenty of photos, but most seem to be small images reproduced from the Snake’s personal scrapbook. Some were shot by professionals, but the majority are simple snapshots. That is not a bad thing, however. I had not seen most of these private images and the amateur photographs add to the intimacy of the stories.

Prudhomme is quite humble in the book, and he is quick to point out the many people who helped him along the way. While the book is concerned with Prudhomme’s career, he talks about many other racing legends he either teamed up with or faced in competition. The Snake discusses Tommy Ivo, Roland Leong, Keith Black, Ed Pink, Chris Karamesines, Kenny Bernstein, Raymond Beadle and many other drag racing celebrities. There are several short reminisces written by high-profile racers recounting their memories of Prudhomme.

Prudhomme has also found friends in many other forms of motorsports. The Snake had an opportunity to interact with several Formula 1 drivers such as Niki Lauda and Jacky Stewart. He tells of his encounter with Enzo Ferrari and how the elder Ferrari invited Prudhomme to one of Lauda’s test sessions. Prudhomme also friendly encounters with racing luminaries such as A. J. Foyt, Mario Andretti, Carol Shelby, Dan Gurney and Cale Yarborough . The forward of the book is written by former NASCAR champion Rusty Wallace.

I was not aware that Prudhomme and Tony Nancy were picked to drive Steve McQueen’s Baha 1000 off-road buggy. There is also the tale of Prudhomme’s first (and last) foray behind the wheel of a blown drag boat.

No Prudhomme biography would be complete without relating his friendship with Tom “the Mongoose” McEwen. This might be my only criticism of the book. Prudhomme’s career was so intertwined with McEwen’s that I would have thought there would be more Mongoose anecdotes. Prudhomme does give McEwen full credit for developing the Wildlife Racing program as well as the Hot Wheels sponsorship. Prudhomme also sheds light on the infamous 25th annual US Nationals where he faced off with McEwen in the final. Still, I would have enjoyed more details of his relationship with McEwen.

Although the bulk of the book examines Prudhomme’s racing activities, it would not be complete without describing how the Snake overcame an unhappy childhood and how his wife and daughter helped him to stay sane and strong.

When I covered the sport in the ’70s and ’80s, I never once thought of the concept of race in conjunction with Don Prudhomme. He was simply Don Prudhomme, champion. Race and nationality never entered into my thinking. But Prudhomme describes that he did indeed face instances of racism. I think most people had an attitude similar to mine, but the Snake names some racers who attacked him because of his heritage.

Elana Scherr is credited along with Prudhomme as the author. Scherr is a contributing editor for Car and Driver and is a freelance automotive writer. She has raced in NHRA Sportsman classes, so she is well suited to help Prudhomme tell his story. It is difficult to know which words are Scherr’s and which are Prudhomme’s, but the writing comes across as authentic and trustworthy.

If you have any interest in the ’70s and ’80s funny cars or want to relive the golden age of drag racing, this book belongs on your shelf. I read it through during the course of a couple of days and I intend to read it over again. It brings to life a sport and a way of life that no longer exists. If you only read one racing book this year, make sure it is this one.

1 thought on “Review: Don The Snake Prudhomme, My Life Beyond the 1320” 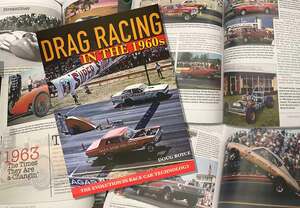 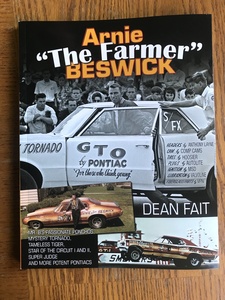