In 1969, Mickey Thompson owned  the two hottest funny cars in the country. Pat Foster drove the “Red Car” (above) and Danny Ongais handled the very similar “Blue Car.” Both were flip-top Mustangs, powered by Ford 427 SOHC V-8s. The two cars were a dominant force in 1969, and the Mickey Thompson cars left their mark wherever they went.

Part of the secret behind the success of the M/T funny cars was the “dragster-style” chassis, developed by John Buttera in California. You can see the sling-shot style roll cage in the photo above. With the light-weight, dragster chassis and Ford supplying engine parts, the twin Mustangs cut a swath through major funny car events across the country.

Despite their advanced features and fearsome performance, the Mustangs looked like the Mach 1 ‘Stangs you could find at the local Ford showroom. Note the real door handle and the actual Mach 1 Emblem on the sail panel.

In this photo, the red car wears the later “ransom note” lettering. Early on, the car featured script lettering spelling out “Mickey Thompson’s Mach 1.” By May, 1969, the lettering looked the way you see here.

If you examine the photo closely, you can see another secret behind the success of the M/T Mustangs. The Thompson cars were the first floppers to run upswept “zoomie” headers. If you study images of earlier funny cars, the headers are either pointed straight out from the car’s side or aimed at the tires in a hope that the heat would aid grip.

Some credit Foster, always an innovator, for figuring out the advantage of pointing the headers upward. Regardless, it made an immediate improvement to the full-body cars. The upswept headers helped to “plant” the rear tires for more traction. Even more importantly, the zoomies provided extra downforce to help keep the car on the track.

Ironically, those headers would ruin Foster’s Detroit weekend. Only a few hours after this photo was taken, the red car would be lying in the ditch at the top end at Detroit Dragway, the body broken and the chassis somewhat twisted. According to a Drag News article by future Car Craft editor Jon Asher, one of the header extensions actually melted on Foster’s first round pass. Foster’s team did not have a replacement on hand, so for the second round they decided to just remove all the zoomie extensions from the two-piece header tubes. This left the remaining tubes pointing straight down at the track

If upswept headers provide downforce, you can guess what happens when you point the headers downward. Foster found out in a hurry as the up-force attempted to lift the Mustang. The red car wheelied, than skated off the track. Foster was unhurt, but the red car was out for the remainder of the weekend.

Foster had the Mustang repaired for the ’69 NHRA Springnationals at Dallas, Texas. During the first round, the Red Car went out of control and crossed directly in front of Gerry Schwartz’s “Rattty Kat” Cougar flopper. Schwartz had nowhere to go and drove directly into the side of the red car. Both cars were destroyed. Foster was not seriously hurt, but Schwartz was killed in the incident.

Foster would go on to drive and build a number of cars in the future. The crash at the Springnationals, however, spelled the end of the M/T Red Team. Ongais single-handedly carried on the Mickey Thompson funny car campaign for the remainder of the 1969 season. The Blue Car won numerous titles, including a victory at the 1969 US Nationals. Ongais moved to Indy Car racing and Thompson built a new team for 1970. Ford wanted a Ford 429 Shotgun motor to power the new car. The Shotgun engine never performed as well on fuel as well as the Cammers, and the new car couldn’t come close to replicating the ’69 results. Thompson continued to campaign funny cars in the seventies, moving to Hemi powered Pontiacs when Ford stepped way from sponsorship.

Most Successful Fuel Funny Car Season of All Time 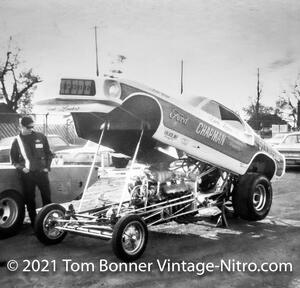