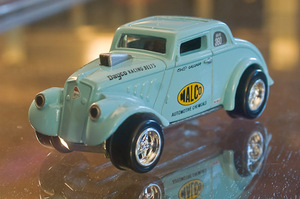 While researching this post, I found a number of references to Ohio George Montgomery memorabilia. Having just seen the Willys at the Henry Ford Museum, I decided it would be nice to park a 1/64 scale diecast model next to my computer.

I purchased the Johnny Lightning model of Ohio George Montgomery’s World’s Wildest Wiilys. Johnny Lightning cars are usually well detailed, but I was disappointed that the front clip doesn’t open on the version I bought. There is a 1/64 Hot Wheels diecast that does does feature a tilt forward front clip with a fairly detailed engine. I may look for a Hot Wheels version of Ohio George’s Willys on ebay.

I’ll stick to the pocket-size 1/64 scale. Hopefully I can find the version with the opening front clip.

Larry Arnold and the Super Cuda