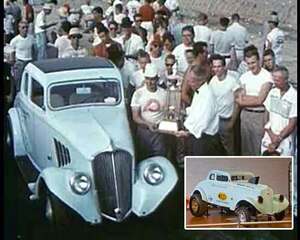 Although Ohio George Montgomery successfully raced the very same Willys Coupe between 1959 and 1966, he made considerable changes to the car during that period. In many ways, Montgomery’s Willys demonstrates the rapid advances drag racers made in the early sixties.

I was able to extract a still image from the public domain Sid Davis film Ingenuity in Action. This image shows Montgomery in the winners circle at the 1959 Nationals at Detroit Dragway. It is the same ’33 Willys Coupe you’ll find in the Henry Ford museum today, although the current form is dramatically different from that of 1959.

The most obvious change is the roofline. When he won the 1959 Nationals, Montgomery’s coupe still retained the original Willys body style, including the stock roof. By 1966, however, Montgomery had chopped four inches out of the roof pillars and windshield. The result dramatically reduced wind resistance, and gives the coupe a “don’t mess with me” attitude.

Next is the front clip. The 1959 version appears to have the original sheet metal, comprised of individual front fenders,, hood, grille and head lamps. In the movie, you can see the hood flapping loose as Montgomery crosses the finish line at Detroit Dragway. That wouldn’t happen with the Willys you will find in the museum today. A single-piece fiberglass, tilt forward front end replaces the old steel components.

Gone as well, are the running boards the coupe carried in 1959. You will also notice the rear tires were fully contained inside the fenders in ’59, while by 1966 they protruded six inches past the fender lips.

How stock was Montgomery’s Willys in 1959? The car still retained the rearview mirror, so Ohio George could see how far ahead he was of the competition. By ’66, the mirror was gone too.

Although the Willys carried a blown Cadillac V-8 in 1959, there was no hood scoop. Today, the Willys carries the famous mail-box scoop, which delivered fresh air to the mammoth Ford SOHC Cammer.

Larry Arnold and the Super Cuda