Now for something a little different. That is my ’57 Chevy Gasser frame in the back lot of Logghe Stamping Company, about to get an Olds rear and Logghe coil-over suspension. But that’s not why I posted this photo.

David Paine runs a Facebook page called The Logghe Years, which obviously chronicles the amazing number of drag cars produced at LSC. Definitely worth following. A few weeks ago, David asked if anyone had any photos taken in the construction shop. 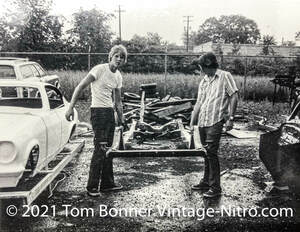 I regret I never took any shots inside the facility, so this parking lot image is all I have to contribute. I believe it was taken in early 1971.

It isn’t surprising to see a bare funny car body at Logghe Brother’s — everyone knows they created the first flip-top funny cars. But whose car did this become?

Who owned this Vega Body Shell?

I am not really expecting a definitive answer, as the Logghe brothers churned out funny cars at an astonishing rate. As Vega floppers were as common as groupies at a rock concert, this car could have belonged to almost any touring racer.

With the exception of a few Ford and Chrysler diehards, just about every major name fielded a Vega or Monza at some point in their racing career. So identifying a team or driver with nothing more to go on but a bare Vega in white gel-coat is a tall order.

Is this the first Vega funny car?

Still, there are a few clues. The Vega first appeared in dealerships in September of 1970. The various fiberglass body manufacturers probably couldn’t start constructing their molds until sometime after that. Notice my cousin and one of my friends are about to drag the chassis into the shop. They are wearing summer-weight shirts, so this was likely taken in the spring of ’71. That is an indication that the body shell is one of the first Vega floppers on record.

You cannot see the grill, but the headlight appears to be from a 1970 style body which featured a flat recessed grill. Chevy started to rake the grill backward in later designs. Racers were quick to lean the grill even further back. Those models had different style headlamps, however. That reinforces the idea this is a first-generation body.

I also wonder about the wheelbase. It may be an illusion, but the wheelbase seems somewhat short for a funny car. It’s certainly longer than a stock Vega, but long nose Vegas became the norm as the body grew in popularity.

Consider Jungle’s Vega from 1975. It unquestionably has a longer nose than the shell at LSC.

I also took into account the ’57 Chevy frame. It isn’t lined up side to side, but if you squint, you can make out the front tires beyond my friend in the photo. Imagine if you rolled the gasser chassis forward until the front wheels were matched with the Vega’s rear wheel opening. It looks as though the wheelbase on the gasser would be much longer than that of the Vega. 1957 Chevys have a wheelbase of 115.” It could be an illusion, but it appears the Vega has a markedly shorter WB than that. Vega and Monza’s floppers that appeared in later years typically had wheelbases of 118 -120 inches. Factory Vegas measured 97 inches axle to axle. This body no doubt features a longer WB than that, but probably well under 118 inches.

Could this be the mythical Seaton’s Shaker?

One possible contender is the Seaton’s Shaker/Al Bergler team car from 1971. Seaton’s involvement only lasted an outing or two before Bergler bought him out and formed a new team with driver Tom Prock. I have studied photos of the Bergler and Prock Vega and it bears a close resemblance to what I can see in this shell. The only significant difference I noticed was the front windshield posts seem to be considerably thinner than the posts on the LSC Vega seen here. But that could be a false impression or the posts could have been trimmed during construction, so that isn’t much of a giveaway.

I couldn’t find a wheelbase listed for the Bergler & Prock flopper, but it does seem on the short side.

Another issue with the Bergler-Prock machine is the fact the Vega suffered some major fires. Draglist says it burned to the ground “early in the year” then was rebuilt only to be “completely destroyed” in another fire later in the 1971 season. Considering the body shell must have been replaced at least twice, it is difficult to reconsile pictures of the race car with this body.

Anyone have any better ideas?

Of course, all of this is simply speculation. I have already established that in that era, Vega funny cars were everywhere. I welcome your theory in the comments below.

It may be an impossible task to identify this particular body. It is fun to conjecture about, however!