Skip to content
It seemed as though every scrap of metal that the Ford Motor Company produced between 1928 and 1931 returned "home" to Dearborn, Michigan for the 1978 National Meet of the Mode! A Restorers Club.

Skip to the Photo Gallery >>

This story originally appeared in the July/August 1978 issue of Vintage Canada, the publication of the National Association of Antique Automobile Clubs of Canada.

It seemed as though every scrap of metal that the Ford Motor Company produced between 1928 and 1931 returned “home” to Dearborn, Michigan for the 1978 National Meet of the Mode! A Restorers Club. It was a double celebration, as the Ford Motor Company was celebrating it’s 75th year of existence, while the Model “A”, first released in 1928, was officially 50 years oid.

Accordingly, “A’s” of every description turned up inside Greenfield Village, Henry Ford’s collection of early American homes and shops. There were coupes, Roadsters, Phaetons, Tudors, Fordors, Station Wagons, Gas Trucks, etc. Some were completely restored, some were completely original. While many of the cars were hauled in on trailers, many, many more were driven to the event. In fact, Glenn and Peggy Wishon earned the long distance award for driving their 1930 Tudor some 2,500 miles from the Los Angeles area. The Wishons, although technically the furthest away, were part of a four-family convoy that travelled to the meet from the L.A. area.

While they couldn’t bring their vehicles with them, a number of Model “A” fans from Denmark, Norway, and Sweden attended the meet, giving it an international flair.

Of course, there were many Canadian entries, with dozens of Ontario Model “A’s” crossing the U.S. border to attend the festivities.

Things got underway on Thursday, with a Flea Market and Seminar. The seminar focused on the building of a typical Model “A” from the ground-up, using many photos taken at the various Ford Motor Company assembly plants fifty years ago. George De Angelis hosted the very informative slide talk, and passed on many tips on how the cars were originally assembled. When De Angelis was unable to answer a question, Edward Francis and Leslie Henry were on hand to back him up.

Since so many of the participants were from out of town, there were numerous sight-seeing tours available to such places as the Ford Motor Company Rouge Assembly Plant, The Ford Fairlane Home, and of course Greenfield Village.

… Model A Fords of every description

More touring went on Friday, including a parade of Model “A’s”. Saturday everyone found their way to Greenfield Village, where the Trophy Judging of the blue ribbon cars went on. Many of the participants were in period costumes, and the activities field at the Village looked like a giant parking lot in 1931, crammed with Model “A’s” of every description.

After everyone became tired of trying to see every one of the seemingly endless variety of “A’s” assembled on the field, the judging committee began to call up the cream of the crop for their well-deserved awards. Picking out the best vehicles out of the 638 cars entered in the trophy competition was no simple task, and the judges really had their work cut out for them.

The Top ’30’-’31’ Open went to Don Bowne of Cambridge City, Indiana. No car earned enough points to earn a first ranking in the ’28’-’29 Open-category. In the ’28’-’29 closed section, Arlan Banning earned the most points with his ’29 Town Car. Larry Gorka, of Novelty, Ohio, earned top honors in the ’30’-’31 Closed category with his ’31 Delux Sedan. The Commercial Category was dominated by James Kirst, with his 1931 “Woodie” station wagon. Paul Pals, of South Holland, Illinois, won the Master’s trophy with his immaculate ’29 Sport Coupe.

Note: The National Association of Antique Automobile Clubs of Canada is now known as THE NATIONAL ASSOCIATION OF AUTOMOBILE CLUBS OF CANADA. You can visit their website at http://naacc.ca/. The Model A Restorer’s Club is also still doing well and can be reached at http://www.modelaford.org/. 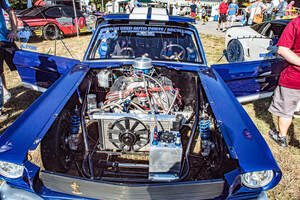 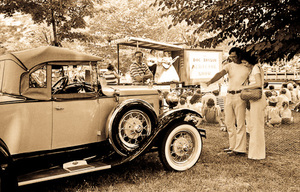