Skip to content
Before Larry Arnold established himself as a top funny car driver, he chased the UDRA circuit with his radical Penetration Dodge Charger.

Dodge Chargers were everywhere at the 1967 Midwest Championships. This somewhat ungainly looking glass charger was campaigned by Larry Arnold of Berkley, Michigan. Arnold would go on to much more competitive rides in the future, but for ’67, this radical long wheelbase Charger was a stand-out on the UDRA circuit.

The body was ‘glass, but I don’t think the car was a flopper. Unlike most funny cars of the era, there was no windshield or side glass. Arnold sat far back in the rear of the car, with an injected 426 Hemi occupying the area where a real Charger’s dashboard would be. If you look closely, you’ll notice a forest of short injector stacks to the rear of the lengthened hood.

Draglist gives Jay Howell credit for building the car, which was painted a royal blue with a wide white stripe on it’s flanks.

After 1967, Arnold moved into the driver’s seat of the fearsome Super Cuda, where he enjoyed much success. He drove the Super Ford for Larry Coleman, before taking the controls of the Kingfish Cuda.  He drove briefly for Mickey Thompson, before Roland Leong tapped him to drive the famous Hawaiian Monza in the mid-seventies.

Arnold looked strong in the early rounds of Detroit Dragway’s Midwest Championships, but he fell to eventual winner Steve McKesson in the semi-finals.

3 thoughts on “Larry Arnold and the Penetration Dodge Funny Car” 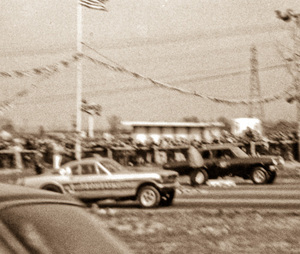