Today, some 40 years after his death, Jungle Jim Liberman is still the stuff of legends. No one wheeled and campaigned a funny car like Jungle. I think that anyone fortunate to witness his on-track antics has at least one good story to tell. This is my Jungle story.

Byron (also known as Rockford) Dragway in Illinois was the home to the best and most well-known funny car freakout show in the Midwest.

Like many drag racing traditions, drag racing freakout events began on the west coast. In the spirit of balloon festivals where all the participants assemble on the ground and fire off their powerplants at once, freakouts would trigger all the funny cars at the same time. Funny cars would line up on both sides of the track facing the stands. At a signal, all the floppers would start their engines and idle for a short while. You can imagine the mayhem caused by 32 or 64 nitro funny cars all blipping the throttle at the same time. With everyone’s ears ringing for miles around, the competitors would shut down and return to the pits to get ready for a conventional two-car, side-by-side first round.

Naturally, track owners on the Left Coast found it easy to collect a huge fleet of funny cars for a winter freakout. Most of the tracks outside of California, Texas, and Florida closed between October and April. Thus, it was simple to recruit a large field of floppers for a weekend show in wintertime California.

It was a different story when the midwest tracks opened in the spring. Strip owners found it difficult (and expensive) to gather a large freakout field. With so many opportunities to earn match race cash, the best cars had plenty of options.

Despite this handicap, Byron Dragway managed to assemble some of the best-known floppers in the country for an annual freakout. The track did cheat a little. Unlike the California freakouts which usually collected a massive field of nitro cars, Byron’s 32 car freakout consisted of 16 nitro and 16 alcohol floppers. 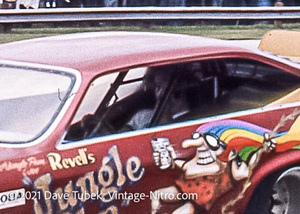 My friend Dave Tubek and I trekked from the Detroit area to Rockford for the 1975 event. Strolling through the pits just before the scheduled freakout, I immediately noticed one of the big-name nitro cars was missing. Although heavily advertised as a participant, Jungle Jim Liberman was nowhere to be seen.

I wasn’t totally surprised. No one put butts into seats like Jungle and as a result, track owners all over the country dangled cash to entice the Jungle man to grace their programs. Jungle was known to schedule bookings from tracks located just a little too far away from each other. There was no way to comfortably get to the next venue on time. So he was late. Often.

Around noon or so, the tower called all the freakout cars to line up on the track. As I prepared my cameras to capture the spectacle, I noticed a familiar box truck among the long line of spectator vehicles attempting to get into the track. I smiled. Jungle had arrived. Too late for the freakout, but he would be able to make the first round.

The freakout was everything you might expect, with many of the best cars in the country pumping flames and nitro into the air. The alky cars couldn’t compete with the fuel cars on noise, of course. They could, however, run longer without overheating, so they kept the extravaganza going even after the nitro cars shut off.

Finally, one by one, all the cars became silent, and the uproar ceased. I started preparing for the first round when the air was once again rent by the familiar wap-wap sound of a fuel-burning Hemi.

My initial thought was one of the freakout cars was tuning up for the upcoming race. A glance at the cars lining the track showed everything was quiet, and the various teams were readying their rides to tow back to the pits.

As I turned to the starting line, I saw it. The familiar maroon Vega, body up and shaking. Jungle was behind the wheel. No face mask or helmet. No firesuit.

As I watched, one crew member casually swung the body down and tugged up once to make sure it was latched. A second guy splashed some liquid in front of the left rear tire.

Things started happening very fast. The starter that day was a tall, long-haired guy with a magnificent handlebar mustache. He had been strolling around the freakout area, examining some of the cars up close.

Now he was running full-tilt at the starting line while dragging his hand across his throat in the well-known “kill” signal. Several other track members were also scrambling to intercept the Vega.

If Jungle saw them, he paid no attention. He lowered the hammer and the Vega started moving forward.

It wasn’t an amazing burnout. In fact, it was undoubtedly the weakest Jungle burnout I ever saw.

If Liberman lost control, it could have been a disaster

My guess is Jungle recognized the risk he was taking. Funny cars and tow vehicles lined both sides of the track. In addition, there were dozens of drivers, crew members, track workers and photographers milling about on the track-side of the guardrail.

So Jungle cooled it. If the throttle stuck or the Vega got crossed up, he could take out half the touring funny cars in the nation. Or worse.

Still, it was a burnout. The Vega blazed the tires between the silent freakout cars, which stood mute like an honor guard standing at attention while their king paraded between them.

I don’t know what the 31 teams assembled on the edge of the track thought of this development, but the crowd loved it. There were two kinds of spectators there that day. People who were already Jungle enthusiasts and those who were suddenly new followers.

Track management was not happy

There was one group that disapproved of Jungle’s unsanctioned burnout, however: track management. They immediately called Jungle to the tower.

Byron Dragway had two public address systems at that time. One was the track-wide system that broadcast over the entire facility. The second one had a single loudspeaker that only reached the area around the tower.

If you happened to be near the tower that afternoon, you heard the track management dress down the sport’s favorite driver. I heard words like “irresponsible,” “dangerous,” “insurance rates” and some other angry words I can’t repeat here.

I doubt that Jungle cared. He had the crowd solidly in his back pocket. Any attempt to penalize him or prevent him from competing would be met by a throng of fams advancing on the tower with torches and pitchforks.

So Jungle made two runs that afternoon. He had the third-lowest ET, which did not qualify him for the final. The two quickest cars faced off for the money, and Gene Snow managed to upend Don Prudhomme.

Another piece of the of the Jungle Jim legacy

But the true winner that day was unquestionably Jungle Jim Liberman. He literally stole the show and added to his legend status. Which is why there will never be another Jungle.

2 thoughts on “Jungle Jim Breaks the Rules at Byron”