Jim Maybeck amd the Patriot Chevelle were also on hand at the 1968 Super Stock Magazine Invitational at Detroit Dragway. The Patriot was obviously Bruce Larson’s former USA-1 Chevelle. Larson sold the Chevelle to Maybeck once his new flip-top Camaro was ready,

I am not sure of the relationship between Larson and Maybeck, maybe they were good friends or Maybeck bought the Chevelle with the understanding that Larson would help him tune the car for a period after the sale. Whatever, the two cars travelled to Detroit together, with the USA-1 Camaro on a ramp truck and the Patriot behind on a trailer.

Not what she seems: a true funny car

I like this photo because it shows the two cars together; the old and the new. At first glance, it might sumbolize the era, with the match-bash Chevelle in the foreground and the flip-top Camaro in the back.

Looks can be deceiving however, as the Patriot is a lot more radical than it first appears. The car looks like a slightly warmed over ’67 Chevelle. The first clue that the car is anything but stock is the front wheel, which is located too deeply under the front fender. The car has a straight-axle, which has a narrower track than a factory Chevelle.

Straight axles were not all that unusual for the match-bash cars of the era, but Larson’s old ride is much wilder than most. While most ’65 – ’67 Chevelle funny cars used a massaged factory GM frame, Larson built a new light-weight chassis out of square tubing.

The real illusion of the car comes from the body, which was entirely of fiberglass. Larson worked for a Chevy dealer in 1965, and was able to acquire a complete set of body panels for a 1966 Chevelle even before the ’66 models were on sale to the public. He took the panels to a local boat builder; who reproduced everything in fiberglass.

The combination of tube frame and fiberglass body made the car very light for funny cars of the era. Most of altered wheelbase machines weighed in at 2500 – 2800 pounds. Larson’s lightweight Chevelle is said to tip the scales at 2200 pounds, a nice advantage in match races.

When Larson debuted the Chevelle, he originally ran it on pump gas. Alcohol fuel followed, then he started to tip the can with nitro. Thus this photo demonstrates Larson’s rapid evolution, injected gas to blown nitro in the space of three years.

One other interesting feature of the Chevelle was Larson’s unique canted forward injector tubes. The vast majority of injected match-racers featured injector tubes arranged up and down like trees in the forest. The tubes of Larson’s rat motor bent forward into the wind. My guess is that forward facing tubes would gain pressure from the car’s forward motion, the faster the car went the higher the pressure in the intake manifold. It would be like having a supercharger without the weight and complexity of a blower.

I’m not sure if it really made much difference, I don’t remember any other cars running forward facing injector tubes. But there is no denying the Chevelle was a stand out performer.

The car was painted in Larson’s signature red, while and blue colors. Larson updated the 1966 body with 1967 Chevelle wrap-around  tail lights and a ’67 front end. That is the configuration the car wore under Maybeck’s ownership. Sadly, the canted injectors were gone, although Maybeck retained the nitro burning rat motor.

Maybeck didn’t race the Patriot for long. By the end to the season, Maybeck sold the Chevelle to future Eastern Raider star Al Hanna. Maybeck built his own flip-top funny car, while Hanna reportedly added a blower to the Chevelle.

The car’s history after Hanna’s ownership is murky. At some point, Larson started to look for his old racer. He found it abandoned in an old gas station. Reportedly it was in pretty rough shape, as time, neglect and owner abuse had taken a solid toll on the Chevelle.

Larson had a plan however, and brought the car to the crew at Don Garlits’ museum, where they strove to return the car to it’s past glory.  They restored the car to it’s 1966 appearance, including 1966 Chevelle front end and tail lights, USA-1 paint and of course, those forward facing injector tubes. The car is now on display at the Don Garlits Museum of Drag Racing in Ocala, Florida.

2 thoughts on “Jim Maybeck and the Patriot Chevelle Funny Car” 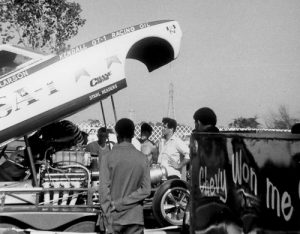