Dateline 1970. The scene: The Detroit Dragway season opener. The draw: A best two out of three match between the Pro Stockers of Bill “Grumpy” Jenkins and Dick Loehr.

If you were there, you undoubtedly remember it well. Heck, you probably still have some mud caked on you, your clothes, your tools or your car. 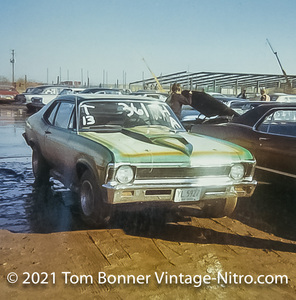 Fifty-two years ago, Detroit Dragway started the season with a rousing Pro Stock match race. While the fans were worked up over the Ford versus Chevy clash, the local racers were more interested in getting back on the track after a long cold winter.

The weather appeared willing to cooperate, as the late March, early April temperatures were balmy and mild. Southeastern Michigan drag racers were all keyed up for a return to racing.

A couple of days before the scheduled match, Michigan pulled one of the meteorological tricks the state is famous for. A surprise snowstorm belted Brownsville Township. Several inches of snow covered the entire Detroit area.

I was fearful the race would be canceled. But when I phoned the track Sunday morning, I was happy to hear the race was on. On my way to Sibley and Dix, I was encouraged to see bright sunshine. Nearly all the snow had melted by the time I reached the track. It wasn’t exactly tee-shirt weather, but I didn’t care. The racing season was about to begin.

After obtaining my pit pass, I was shocked to find the entire pit area was a sea of mud. The muck oozed throughout the pit area creating a trap for cars, trailers and crew. The cars dragged mud into the staging lanes, the bleach box, and eventually onto the starting line. It was a mess.

I have been to Detroit Dragway hundreds of times, in all kinds of weather. But I never saw conditions as awful as opening day, 1970.

I am no weather expert, but I suspect that the slowly melting snow created a different kind of sludge than an ordinary thunderstorm. The half ice, half water snowmelt did not drain into the ground, but remained on the surface. As the slop mingled with the clay in the pits it turned area into a deep slushy bog.

No one escaped the mud

You can’t imagine how bad it was that day. Walking through the pits, the suction from the slop threatened to yank my shoes off. Every step was accompanied by a disgusting sloughing sound created when I dragged my feet free from the mushy glop.

Racers who spent the winter polishing their cars for the new season, now found their undercarriages coated with several inches of muck and mire. Their brand new chrome wheels would never recover from being submerged in thick clay and slime. Pity the poor guys that had to lay underneath their cars in the water and muck to drop their exhaust systems.

Even the hot car pits were caked with mud

Jenkins and Loeher had the luxury of setting up in the hot car pits, a paved area adjacent to the staging lanes. But even this concrete oasis couldn’t remain free of the morass for long. By early afternoon, several inches of slime coated the hot car tract, deposited by people and vehicles attempting to escape from the bog. Cars tracked mud from the rest of the facility over the concrete, while drivers, crew and spectators hauled in huge cakes of muck on their shoes.

My photos don’t do the scene justice, as I took my photos early in the day. As the day progressed and more cars churned up the pit surface, the fiasco in the pits, in the staging lanes, and the starting line intensified. By then, however, I was out of film.

It was particularly hard on racers with trailers, as the trailer would embed itself up to the axles, which in turn would cause the tow vehicle to become well and truly stuck. Detroit Dragway’s old Ford tractor was kept busy luging race cars out of the quagmire.

Anyone witnessing the events of that afternoon will never forget the scene in the pits. Stranded race cars unable to power out of the mud. Crewmembers slathered with slop from head to toe. Racers digging through the cold, muddy water trying to recover buried parts and tools.

It was a disaster, yet everyone was in good spirits. Winter was over and the new racing season was underway. The track was a frightful mess, but everyone knew better weather was coming. The pits would dry out, the track and staging lanes would be cleaned and some of the biggest names in drag racing would be booked for future events.

It was a catastrophe, but everyone was excited for the brand new season

We were filthy, but nothing could dampen our enthusiasm for the start of the new season. Winter was over. We had months of racing action to look forward to. 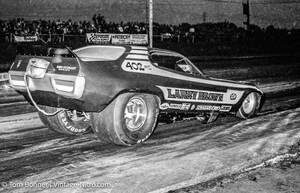