Carl Holbrook was known as Captain CobraJet. Actually, I don’t remember anyone calling him that while I was covering drag racing, but I have seen several references to the moniker in conjunction with Holbrook.

The title is appropriate, because Holbrook was THE Ford Super Stock builder in the Detroit area. When Holbrook talked, all the Ford guys hung on his every word. Little wonder, as Holbrook’s Instant Action Mustangs accumulated a host of class and eliminator titles in both NHRA and IHRA competition.

Holbrook: Both a Racer and a Builder

While Holbrook was a threat in himself, he was a top engine builder and at any national event you would find a multitude of Fords and Mercury machines wearing Carl Holbrook Racing Engines stickers.

I can remember visiting Holbrook’s Livonia shop several times. The work shop was always crowded with Holbrook’s own fleet of Mustangs, as well as numerous customer vehicles. Besides the race cars themselves, there was a collection of engines in various states of assembly. The willingness of Ford racers to stand in line speaks volumes as to the great reputation of Holbrook Racing Engines.

Any tire which will fit

In this Detroit Dragway picture, you can see Holbrook is hooked up to the drag strip. Very hooked up. I am sure there the chassis was tweaked to increase weight transfer, but those huge rear tires certainly helped the car bite. They look like they would be something you would find on a top fuel or funny car, but somehow Holbrook found room for them on his SS/FA Mustang.

In addition to their on-track efforts, both Carl and Chris were very involved in Ford’s CobraJet crate engird development program.

On the Holbrook Racing Engines website, Chris Holbrook says “We do a lot of work with Ford Racing Parts, research and development work mostly with their crate engines. When Ford first came out with the Cobra Jets with the pushrod engines [ed note. – the 352 and 428CI engines] back in 2010, we originally designed and built those engines for Ford Racing. They built the cars, and then the engines went into the guide for NHRA to be factored for Stock and Super Stock competition.”

If you like Super Stock racing, check out these: 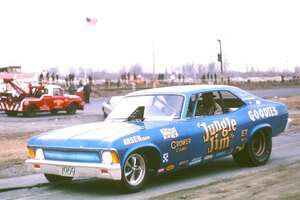