(April 9, 2022) The second Southeast Gasser’s Association event of the 2022 season was known as the Gene Cromer Memorial, commemorating a racer who tore up the tracks in the ’50s and ’60s. Cromer raced Gassers, A/FX machines, and Pro Stockers.

Cromer was a huge influence on Quain Stott, current SEGA president. Stott says that without Cromer, chances are there would not be a Southeast Gasser’s Association. So when Cromer lost his life in a non-racing accident in 2021, Stott and members of the SEGA determined to have a memorial race in Cromer’s honor.

SEGA at Shady Side Dragway

Shady Side Dragway in Shelby, North Carolina was selected as the site of the memorial. Members of Cromer’s family were on hand for a special presentation and Cromer’s fully restored Willys gasser was a popular static attraction.

The race was also the second event of the 2022 SEGA season. Cool temperatures and strong breezes made jackets and parkas compulsory, but the sizzling action on the track was enough to keep the fans from worrying about the cold. A couple of minor rain showers interrupted the procedures, but the final pair concluded the event long before dark.

Sixteen cars qualified for the Super Stock field, with Rick Varner’s ’67 Camaro securing the number one qualifying position. Mark Hacket was right behind him in his Mercury Poison Mercury Comet. Not surprisingly, these two drivers advanced to the final. Varner took out Dale Morton’s Lucille in the first round, then enjoyed a bye in round two. He got around Rick Cathcart in the semi-finals.

In the interim, Hacket drove his Comet past Don Wilhot and Tyler York to gain the semi-finals. Tim Bailey’s Little Tramp fell to the Mercury, advancing Hacket to the final.

The money run was close, but Varner couldn’t be denied in the Dirt Man Camaro. Varner now leads in points at 65, with Hackett sitting at 60 and Tyler York holding 50 points.

The C/Gas field also consisted of sixteen cars with Tim Hall grabbing the number one position in his Scalded Dog AMC Rambler. Hall made short work of Matthew Miller’s Hell’s Belle ’50 Ford in the first round. He then cruised past Ernie Smith’s Saturday Night Special and Alexis Phillips in the Flower Power ’55 Chevy.

The C/G final pitted Hall’s tiny AMC against Oden’s hulking ’58 Chevy Delray. In one of the closest races of the day, Hall slipped past the Double XX, turning on the win light by a mere 0.02 seconds. Hall’s win gives him the lead in championship points, with Oden a mere five points behind.

Typically, B/Gas attracts the largest field at a SEGA event, and the April event at Shady Side was no exception. Twenty-one cars attempted to qualify, with Colby Welch’s always tough Moonbeam Ford Ranchero heading up the field. Surprisingly, The Patriot Falcon, driven by Daniel Haynes, could only muster a dead last twenty-first qualifying bid. Haynes was fifth in points for the 2021 season, so his off-the-pace runs could have a big impact on the 2022 points championship.

Meanwhile, Bill Revels was having a great day as he took out Zak Hall, Mike Blackwall, and Ray Fassel.

Leslie Horne not only qualified number one in A/Gas, he also set a new SEGA A/G record. Driving his very potent Chick Magnet ’55 Chevy, Horne looked to be the class of the sixteen car A/G field. Horne’s advance to the final didn’t come easy. Marlin Short and Chase Howard fell to the Chick Magnet in the first two rounds. Next Horne faced the 2021 A/G Champion Gabriel Burrell in the Southern Flyer Model A. Horne skated past last season’s champ to put himself in the final.

On the other side of the ladder, Ben Christopher qualified his Happy Daze Nova in the number three slot, then drove around Robert Fraiser’s Black & Blue ‘Cuda. Next, he faced two very strong entries but managed to get by Kenneth Phillips in the Silver Streak Corvette and Rick Varner’s Dirt Man Chevy II. Varner has earlier dispatched number two qualifier Terry Housley, whose Mr. Quick ’55 Chevy broke and couldn’t stage for round two.

Horne’s Chick Magnet was the car to beat and it showed. Christopher put together a strong run, but the rapid ’55 Chevy was stronger. Horne wrapped up the weekend with the trophy, a new A/GS record, and an early lead in the points championship. (65 points) Christopher sits in second with 60 points. Of course, there are many races to come and anything can happen, but it is always good to be on top of the championship ladder.

There are reports of several new cars being built for the hot SEGA A/FX class, but only three cars showed up at Shady Side for the Cromer Memorial. Todd Wimberly looked very strong in qualifying with his Southern Comfort Falcon, but the car broke and was unable to make the final. That left Allen Platt in the Georgia Shaker III to face his cousin Rocky Platt in the Dixie Twister. Unfortunately, the Twister had difficulty staging and the tree counted down before Rocky Platt could stage. This left the red-eye shining in the Twister’s lane. Allen Platt stormed the win with the electric blue injected Ford.

(Click on the images to view them at a larger size. 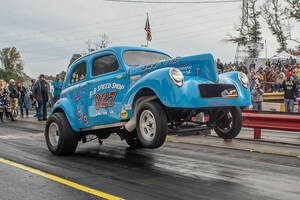