One of the entries at Charlie Craig’s 2021 car show was this 62-year-old Chevy pickup. It is a true survivor, with what appears to be the original interior, engine bay and four-wheel-drive package.

Check out the Phoro Gallery below

Unfortunately, the owner wasn’t present, so I can’t give credit where credit is due. Nor could I get information other than what I could glean from inspecting the truck.

Although the ’58 and ’59 Chevy trucks were nearly identical, the trim and paint suggest this is a ’59 model. It has the Napco Powr-Pak four-wheel-drive package installed.

I can’t say whether the Powr-Pak option on this truck was installed at the factory or added afterward.

The truck appears bone-stock, although it looks so clean I suspect it has been restored at some point. Yet the driver’s seat cloth has some damage hinting it is original. Some of the paint on the fender emblems looks faded, so they appear to be original as well.

There is a small block Chevy in the engine bay. The ’59 Fleetsides came with either a straight-six or a 283 V8. Considering everything else on the ruck looks original, I’m betting the engine is a 283 from the factory.

All in all, this is an excellent rendition of the Chevrolet Task-Force line of trucks from the late 1950s. 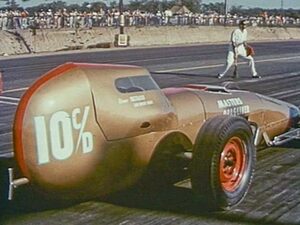 Part 2 of Ingenuity in Action at Detroit Dragway 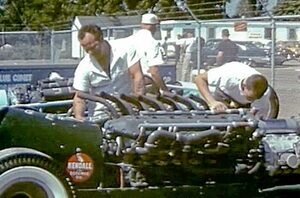 Ingenuity in Action: Detroit Dragway in 1959